Sweet Life Disclosure: I am excited to be partnering with Land O’ Lakes  this year to bring you exciting new recipes. Thank you for supporting the brands I collaborate with. 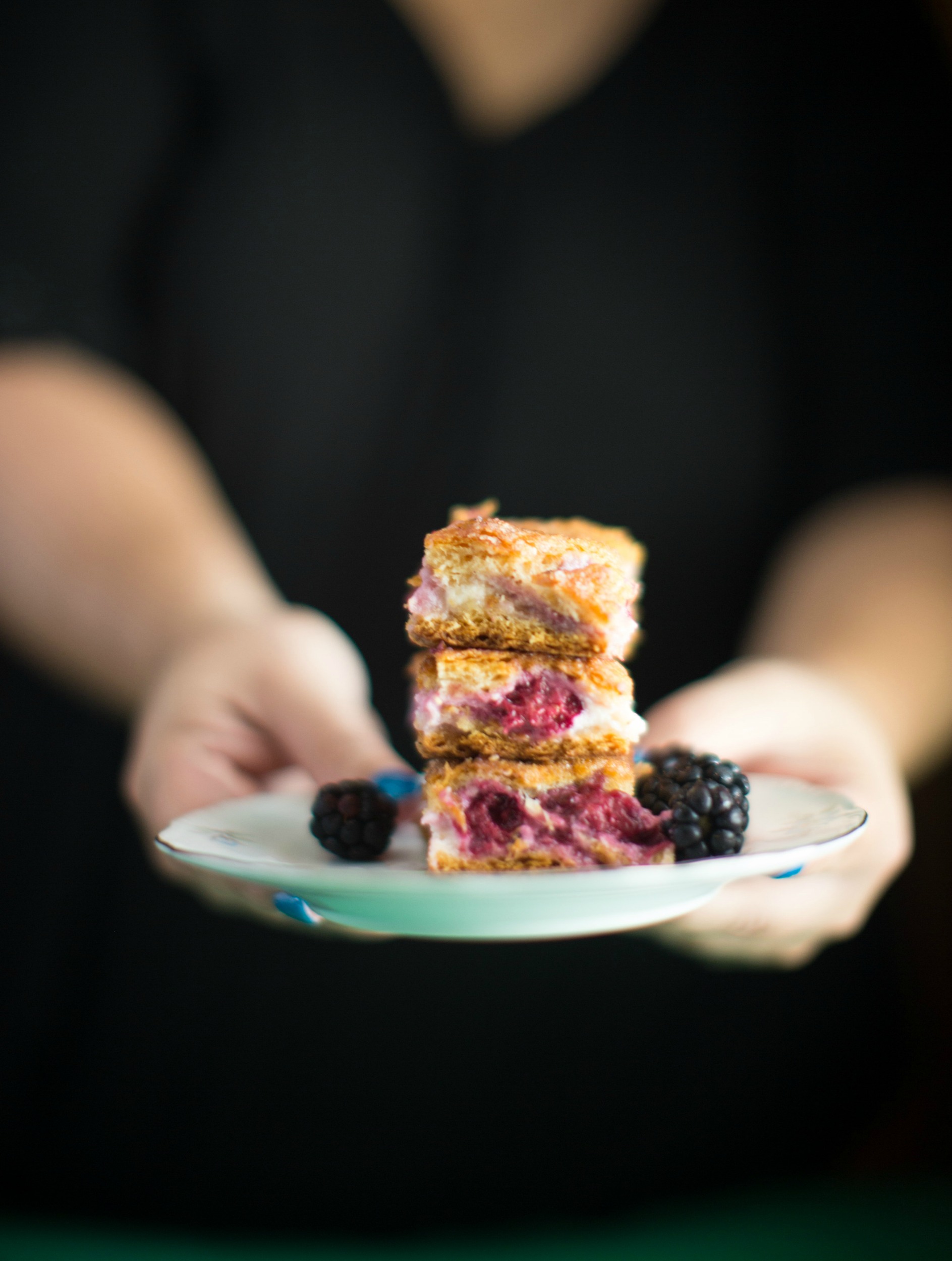 Crispy fried dough coated in cinnamon sugar served warm with honey sopapillas are mi carino’s favorite dessert. As a kid, his parents would take him to a local restaurant called Pancho’s. Pancho’s served an array of Tex-Mex dishes from crispy tacos, enchiladas, and fajitas, buffet-style. At every table, there was a tri-colored flag featuring the colors of Mexico, that customers would raise to request a refill. Pancho’s is most popular for the slogan “raise the flag,” and their piping hot sopapillas.

Pancho’s closed its doors in the late 80’s here locally and most of its other Texas locations, only a few locations still operate in Northern Texas. 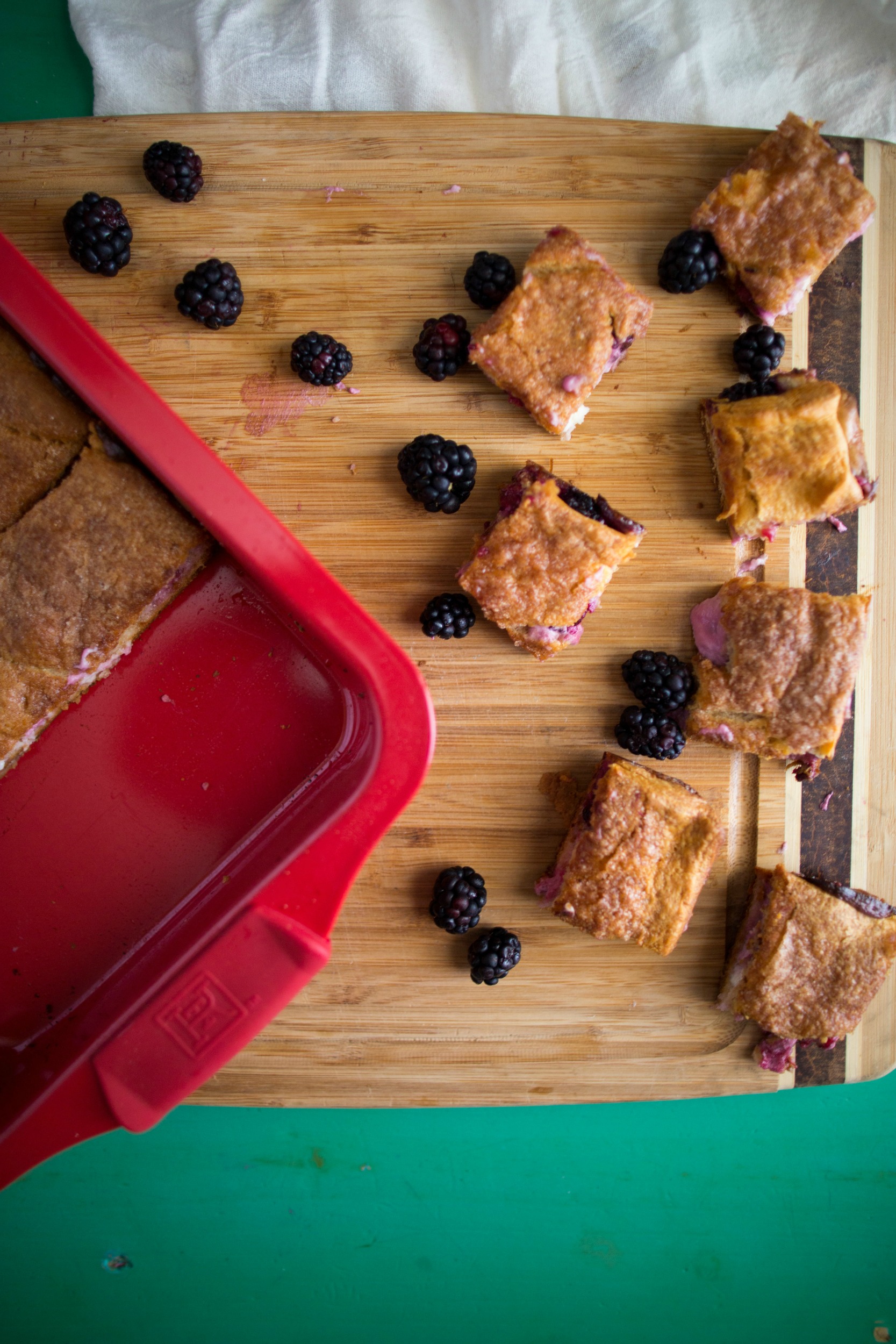 He loved them. Or I should say he loved me.

And he has been eating sopapilla bars ever since.  Over the years, I have baked several different variations of these sopapilla bars – chocolate, pecan pie, lemon, peach, but our favorite hands down is blackberry. 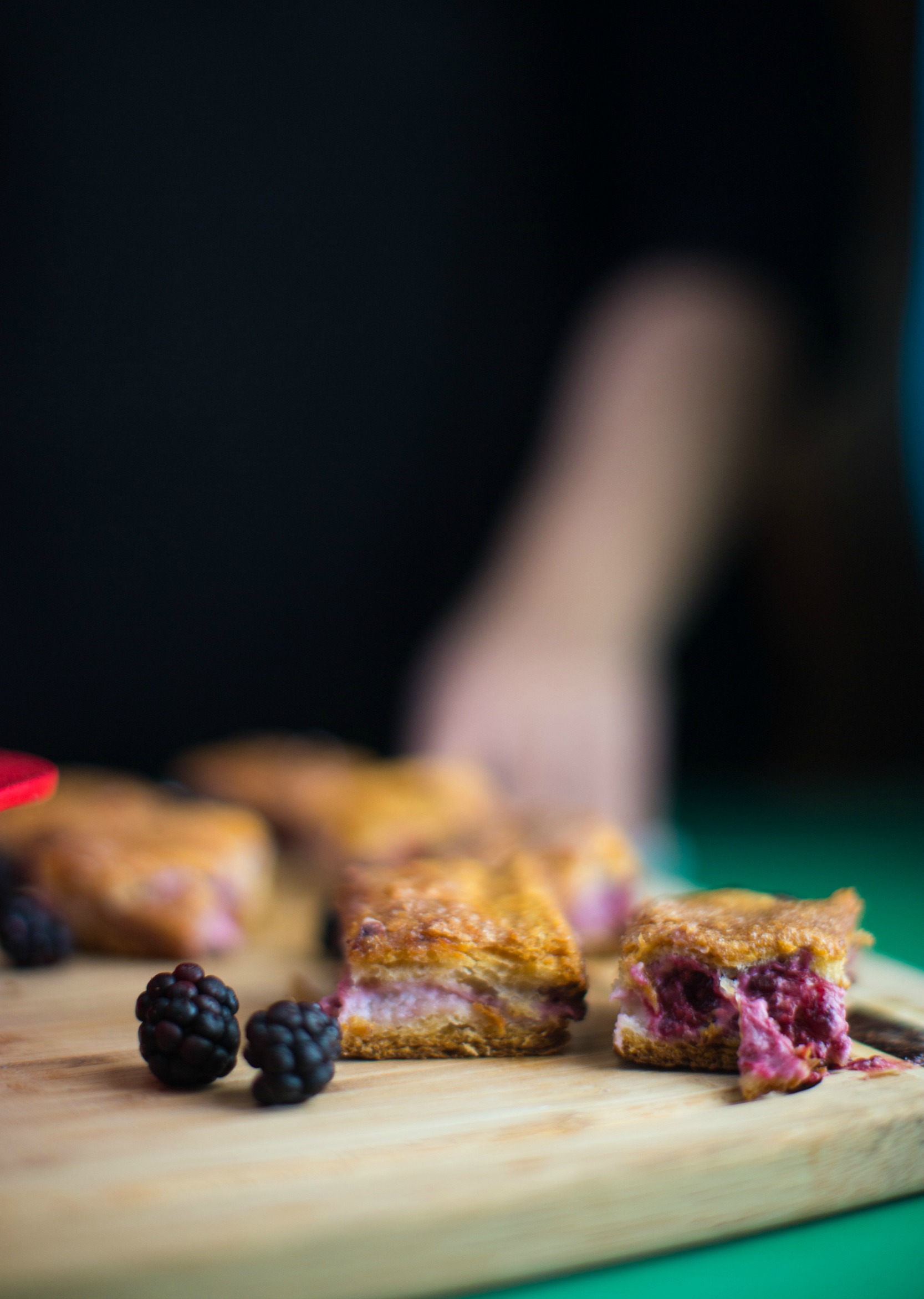 My mami grows wild blackberries in her backyard. In the month of July, they overtake the entire yard. Vibrant and juicy we pick them daily to add to these blackberry sopapilla bars. 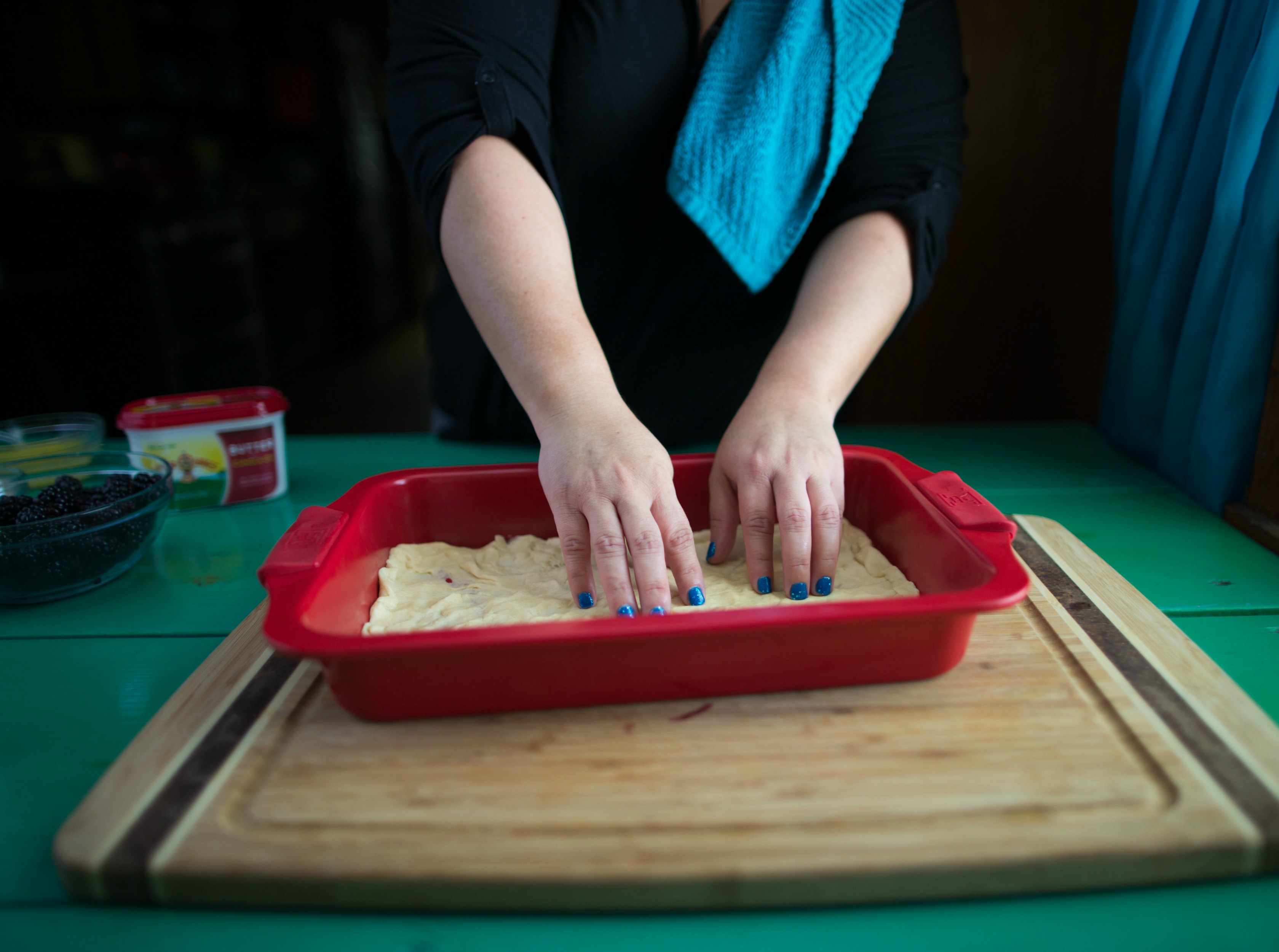 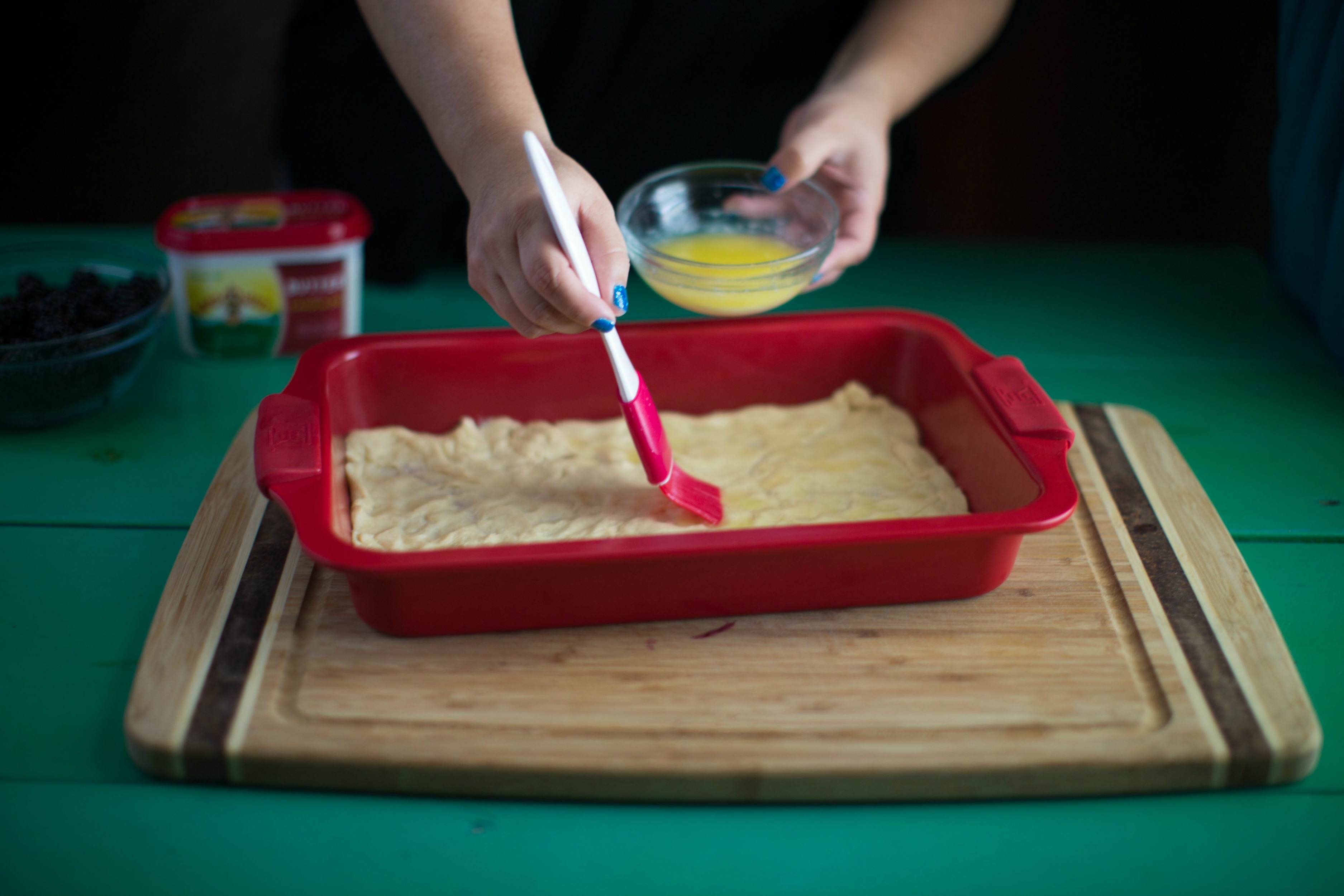 I brush both the bottom and the top layer of the crescent roll with the butter with canola oil before adding the cinnamon sugar which results in a crispy crust. 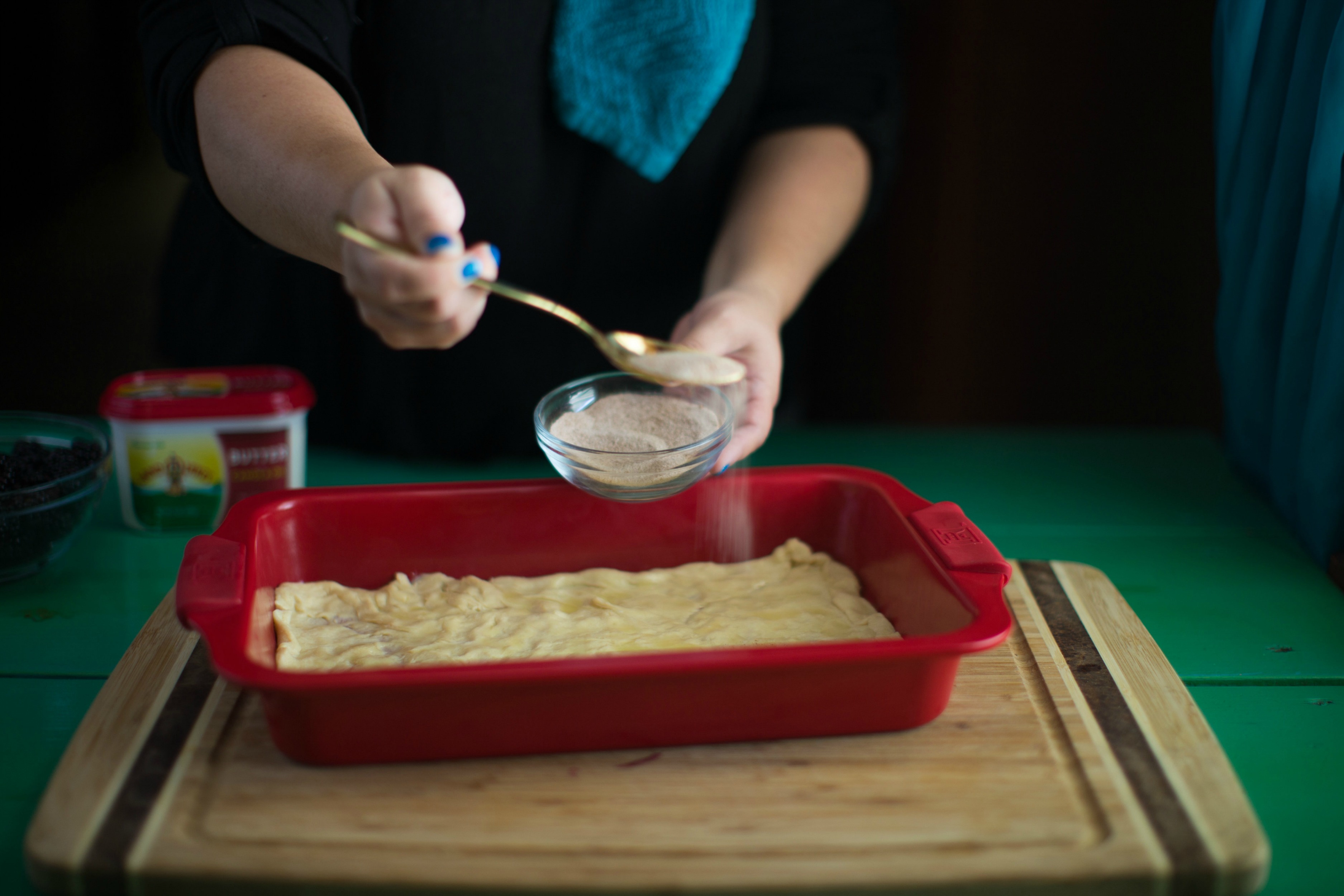 The Land O Lakes® Butter with Canola Oil features three simple ingredients: cream, canola oil and salt. It provides the fresh butter taste with the convenience of being spreadable right out of the refrigerator! 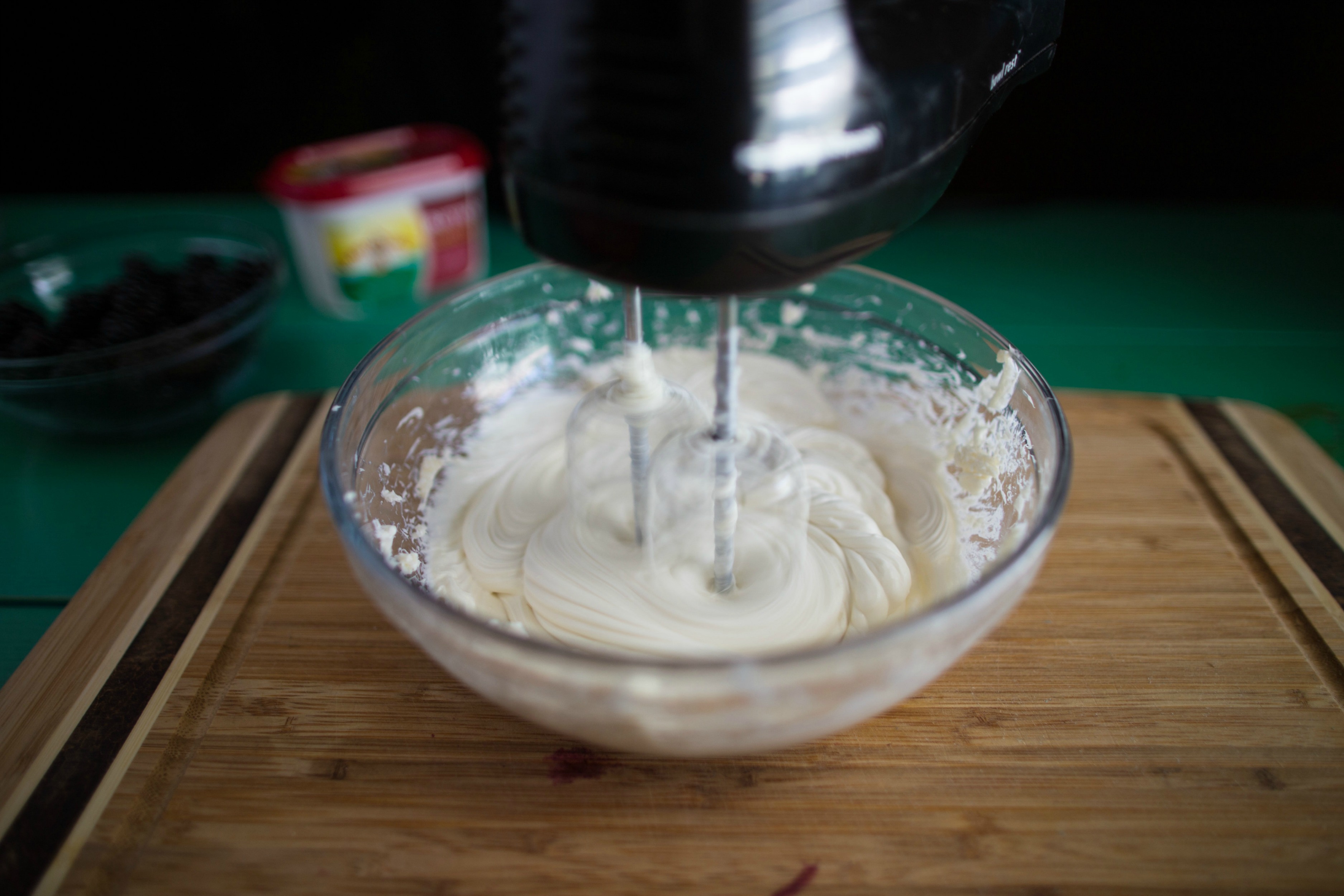 The filling comes together quickly with a hand mixer, then is spread over the bottom layer. Plenty of fresh blackberries over the cheese filling. You can also use blackberry jam.  Once baked, these blackberry sopapilla bars are dreamy. 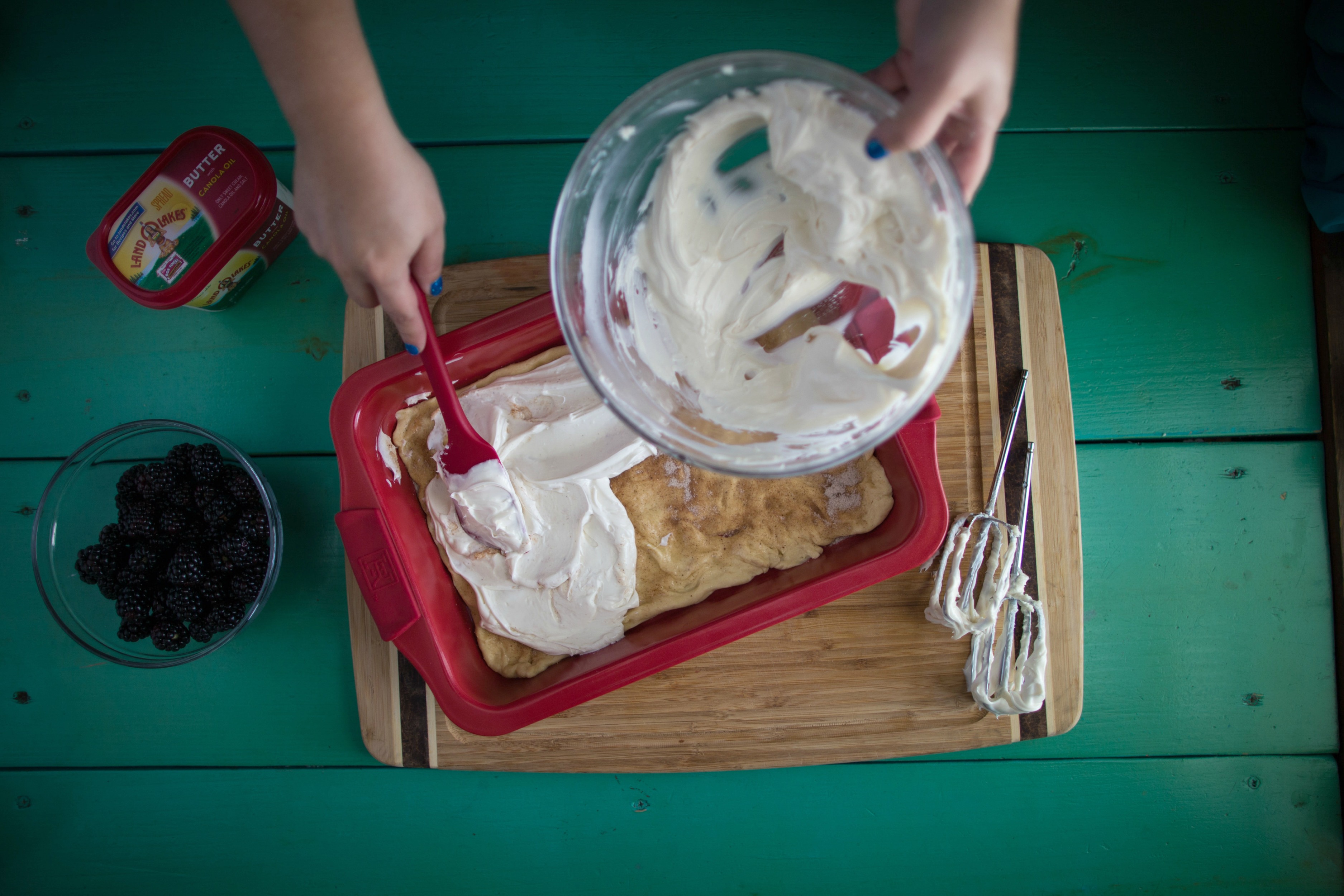 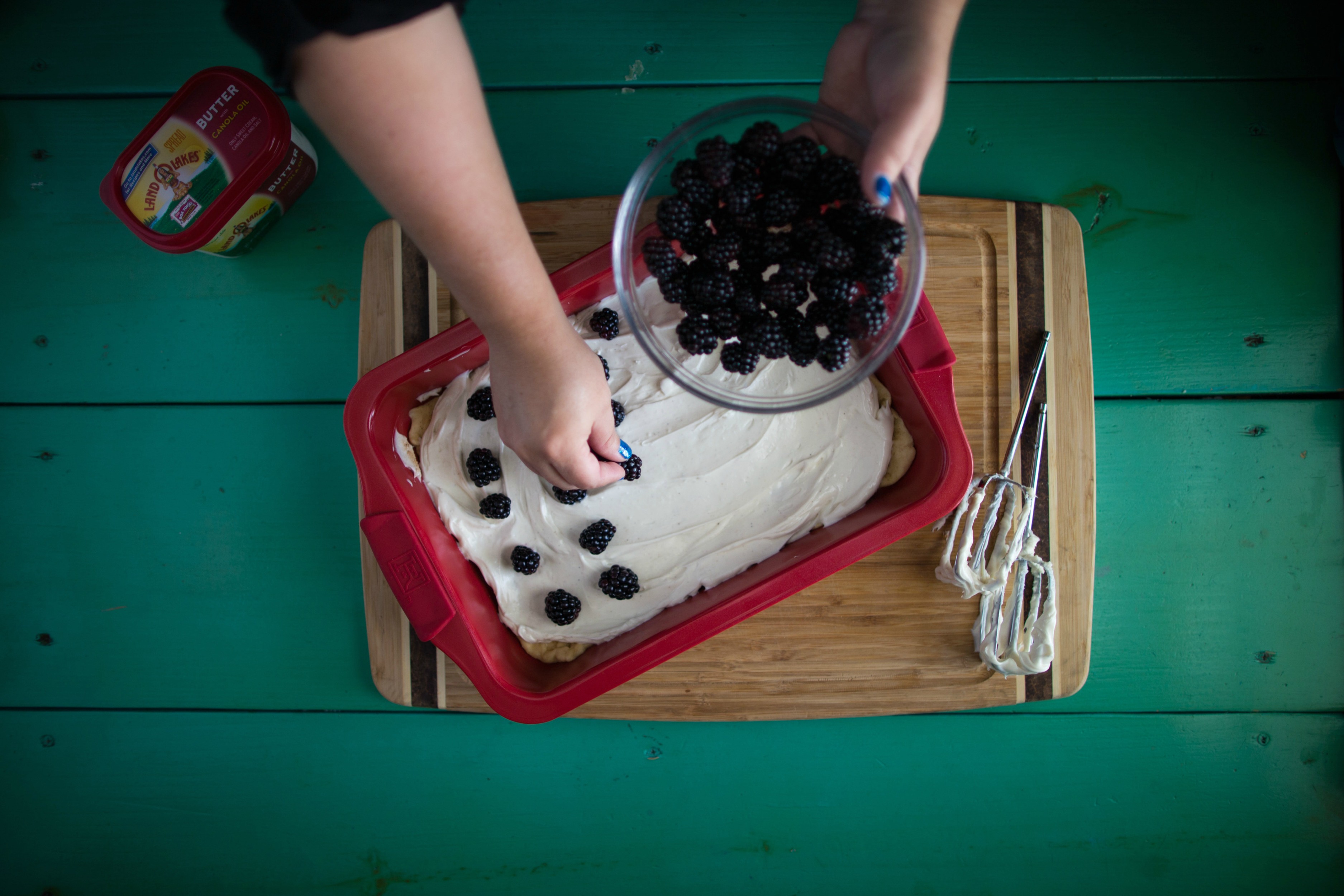 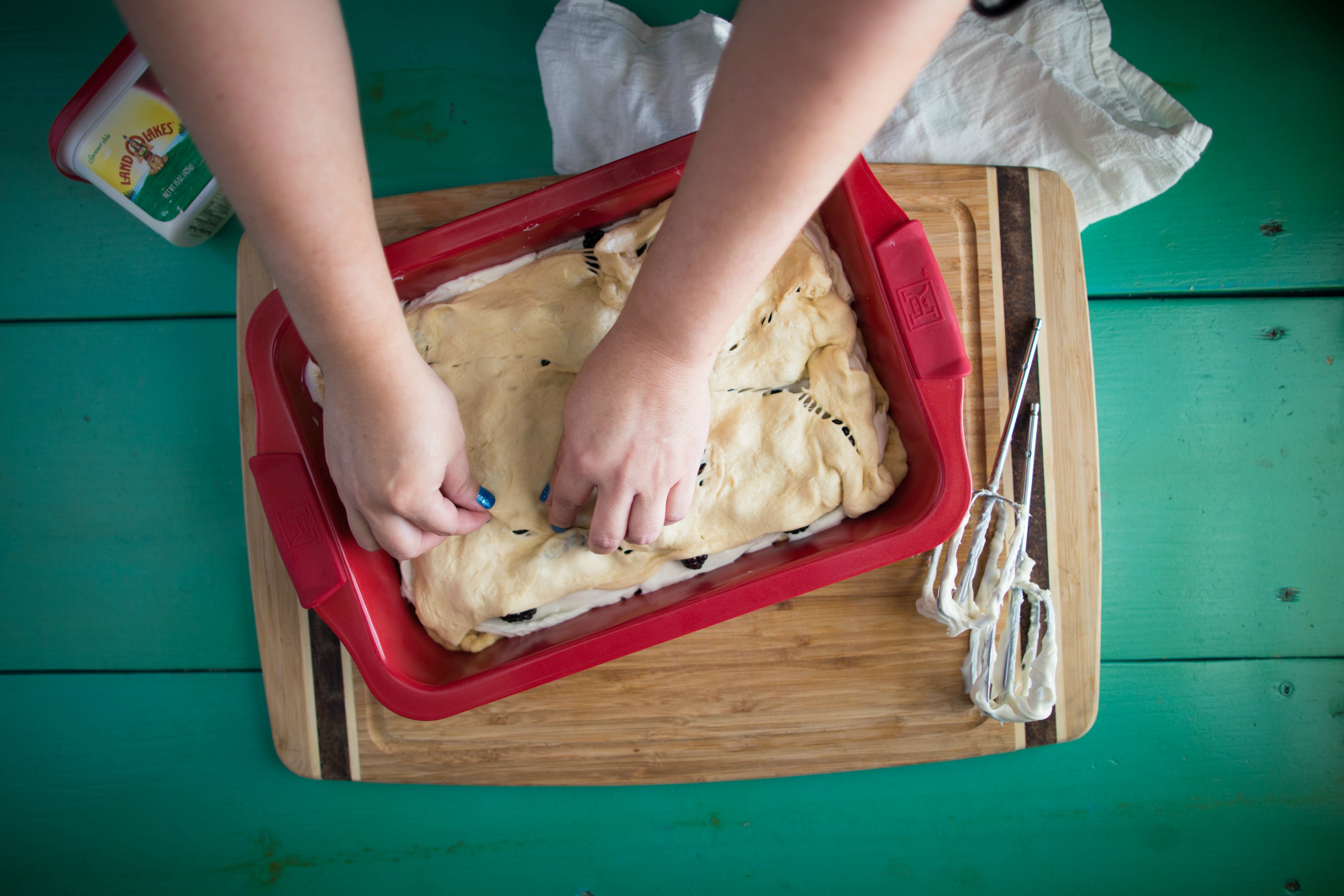 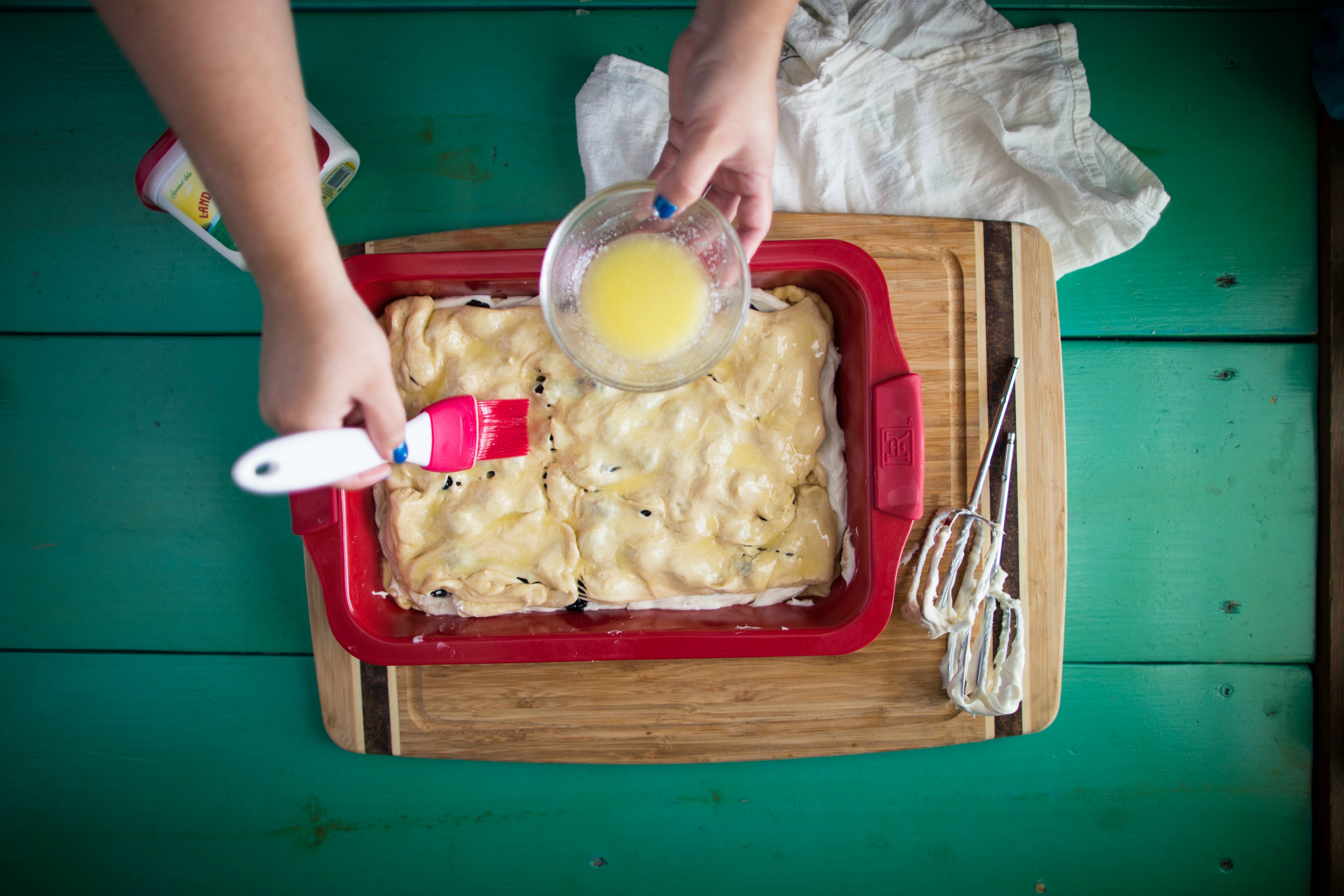 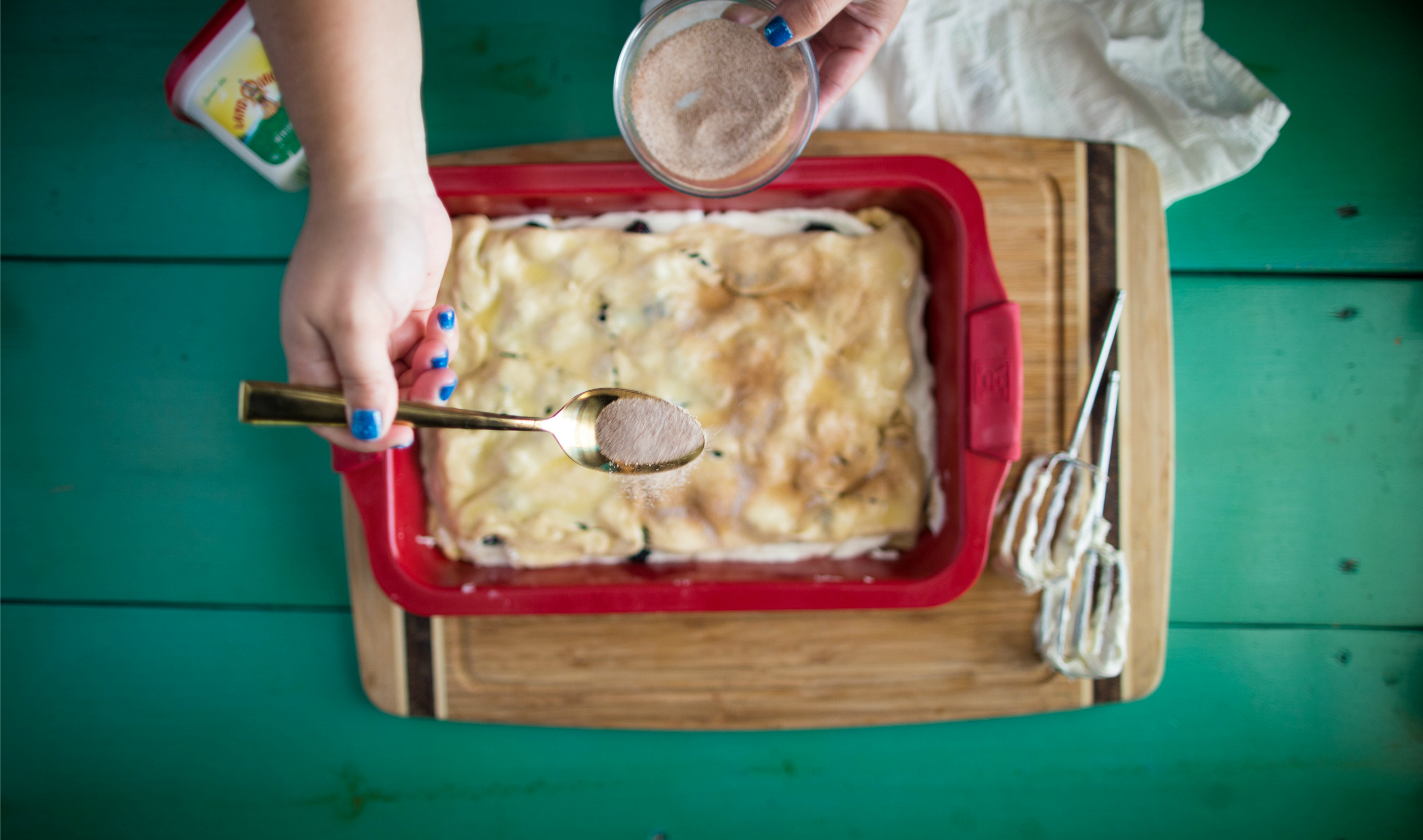 I’m including a short video on how easily these blackberry sopapilla bars come together. 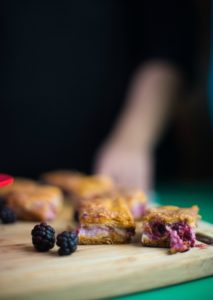 Preheat the oven to 375F

Combine 1/4 cup sugar and cinnamon in a small bowl, set aside.

Unroll one can of crescent rolls and place at the bottom of a 9×13 baking dish. Seal the perforations with fingers.

Lightly brush with melted butter with canola oil, sprinkle with half the sugar-cinnamon mixture.

Unroll second can crescent rolls and carefully place over blackberries, seal the perforation with fingers.

Brush with melted butter and sprinkle with remaining cinnamon-sugar.

Bake for 25-30 minutes or until top is golden brown

Remove from oven, allow to cool for at least 30 minutes before slicing.  Store in the fridge.