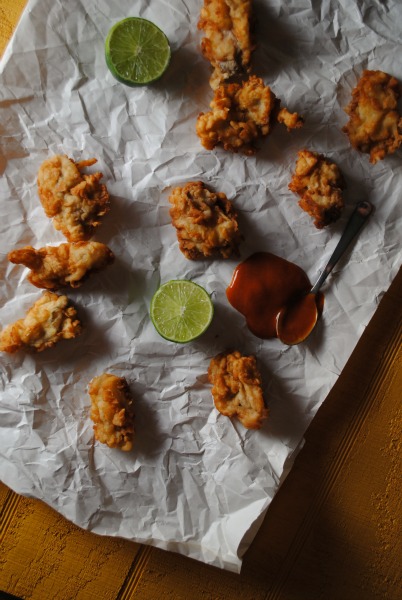 I have recently became friends with oysters. Our relationship was rocky, from the start we got off on the wrong foot, tempers flared and they were stricken from my heart.  This is a major since I reside on the Gulf Coast where plump, juicy, fresh oysters are beloved by all.

I had a bad experience, and what makes it worse it was my godmother who fried, served and presented them to me with excitement.  Love her.

The two families met when my parents first moved here in the 70’s, became fast friends and they were given the honor to Baptize me, sponsor me at Confirmation and walk me down the aisle on my wedding day.  Saturdays were spent at their house were the men would man the grill, sip on beers and watch over the kids.  The women chatted, fried shrimp, oysters and made potato salad.

Maybe I was spoiled by my mom’s confident hand with oysters, she would plop them in seasoned flour, egg, once again in flour and give them a quick fry.  My mom has always had a gentle hand in frying, she’s hard to live up to.

My godmother dredge her oysters in cornmeal, fried until golden brown and plattered them up.  I took one bite, the crust was soggy, the center was hard and there was no seasoning.  It left a sour taste in my mouth.

She was cooking for a large crowd, there was kiddos running all over the house and she would much rather chat with my mom. I know I would.  But it stuck, the taste stuck with me all throughout my teenage years. I was 8yrs old at the time and I can still recall the taste.  I’m funny that way I make a connection with a plate of food, a taste and it just sticks.  My mom tried coaxing me with her oysters, it didn’t work.  No likey.

Was it her fault? No.Do I blame her? No, not in any way.  I actually love her even more for that moment.  A food moment, whether good or bad is still a moment, get me? 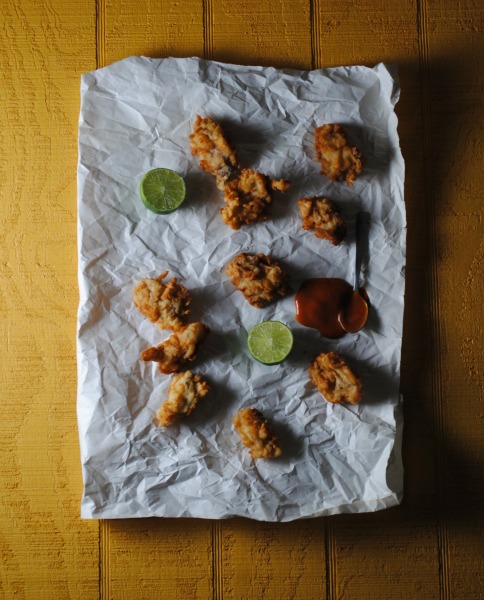 Flash forward to last month where we stopped by the Oyster Fest in Fulton, Texas and well there were oysters EVERYWHERE.   Sold by the dozen on the shell, fried or on a roll they were on display.  The smells were intoxicating and my kids’ were soaking it all in.  I, of course was hesitant, only had attempted them 3 times since my experience when my 8yr said, “Wow, mommy these are so good!”

She was holding a tiny tray of fried oysters, she is 8yrs. old and it was time for this gal to pull on her big girl panties.  I preach the flavors of the world, give it a try, try new things, make your tongue happy and I was afraid of oysters. What a baby.

I smiled at her, reached into the tray and took a bite.  What a fool I’d been such a waste of years that I could have been nibbling on these tiny gifts from the sea.  A new moment.  A tasty new food moment.

I took my new found appreciation and attempted to recreate my mom’s version I like to move from tiny to enormous steps in my kitchen.

Sweet, plump and juicy these fried oysters are light, tender and taste of the ocean.  I was happy, more like ecstatic with the results, mami would have been proud.  I’m making of for lost time and frying a whole boatload of these gems again over the weekend for family and of course for myself.  As for my godmother maybe I should take her a few dozen or maybe not.  Not once did I ever tell her that I didn’t like her oysters, good girls never complain.  Thinking about it now it was me, not her that was stubborn to not try them again.  I stood my ground and ended up neglecting myself of the experience.

Making up for lost time. 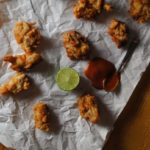