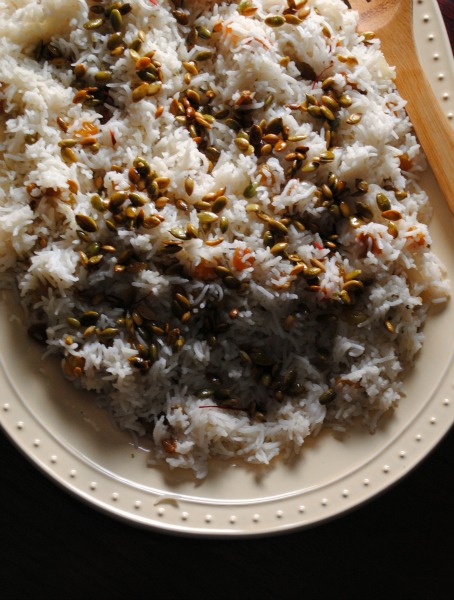 Happy Friday!! I have a very special post for you today. My friend Faith Gorsky from An Edible Mosaic just had her first cookbook released: An Edible Mosaic: Middle Eastern Fare with Extraordinary Flair. I’m excited to be participating in her virtual book launch party and sharing a recipe from the book!

The book has over 100 Middle Eastern recipes, with a focus mainly on dishes from the Levant, but also a few recipes from other areas of the Middle East.

After getting married Faith spent six months living in the Middle East, where she fell in love with the culture and cuisine. Subsequently, she returned four more times for visits, each time delving deeper into the cuisine and deepening her passion for and appreciation of the region.

Recipes in her book are authentic Middle Eastern (taught to Faith mostly by her mother-in-law, Sahar), but streamlined just a bit for the way we cook today, with unique ingredients demystified and cooking techniques anyone can follow. If you didn’t grow up eating Middle Eastern food, it can be a difficult art to master; Faith understands that, and explains complicated dishes in an approachable, easy-to-follow way. The book is available to order on Amazon and Barnes & Noble! 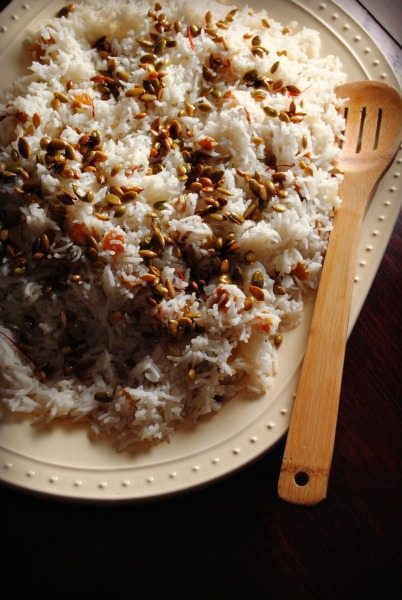 The recipe from the book that I’m sharing with you today is for Saffron Rice with Golden Raisins and Pine Nuts(I used pepitas). The recipe is actually vegan so you won’t have any trouble incorporating it into a vegan or vegetarian meal, but it is just as delicious served with chicken, beef, lamb, or seafood, and it would be really fantastic with just about any curry dish. (In the cookbook, Faith recommends pairing Shrimp in Aromatic Tomato Sauce with this rice dish.)

Cooking Time: 20 minutes, plus 15 minutes to let the rice sit after cooking

Soak the rice in tepid water for 10 minutes; drain. While the rice is soaking, put half a kettle of water on to boil.

OPTIONAL Add two pods of cardamom, two whole cloves, and one 2-inch (5 cm) piece of cinnamon stick at the same time that you add the rice.